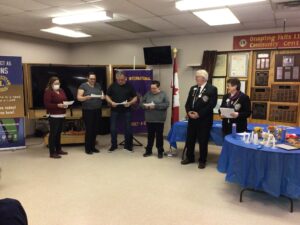 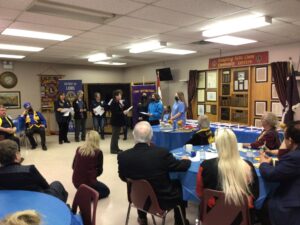 The Onaping Falls Lions is at it again. With the lifting of co-vid restrictions, they decided to celebrate their “comeback” in a big way. They held an induction ceremony to bring in another 8 new members to their club, two of these new members are graduates from the Leos Club. In total, the club has added 16 new members to their ranks. You may not think that is a large number, but to a District that has clubs ranging from 6-45 members each, this is a huge deal. Also pictured here is the Leo’s mascot, 5 year old Ellie who is planning to become a Leo as soon as she is old enough. Our future District Governor, in a few years. Congratulations to Onaping Falls Lions on winning the District A5 Membership Growth award for all of your hard work bringing in new members.

District Governor Debbra Christiansen accepts a cheque for $500 from Onaping Falls Lions Club for one of the projects for her year. Camp Quality provides children with cancer with a week of being a kid, not just a kid with cancer.